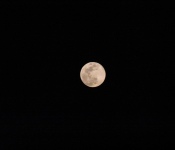 Not posting much, just wanted to share a few photos I took tonight of our favorite girl, who will also form a conjunction with Jupiter over the next 24 hours. Pink Full Moon is quite active this year, making connections with all the planets in our Solar System, save Mercury, Uranus and Venus. Nothing packs the wallop of a conjunction though. Moon in Scorpio may be in her fall, but I always enjoy the mellow vibe of Scorpio Moon. For some reason, Moon in her exaltation in Taurus makes me feel depressed. I kind of get a charge out of anything passing through my Scorpio 6th house. Even though the 6th, 8th, and 12th houses are poor hosts for the planets, I personally feel like I can catch a break and actually get things done during times of less external activity.

P.S. While I was grinding away the other day at a two month old post, several newsworthy, and therefore astrologically worthy things took place. One, which I did touch on, was that the Koreans declared an end to their war which spanned nearly 70 years. Also, Bill Cosby was convicted of drugging and sexually assaulting a young woman, who was likely the most credible of a long list of women who have accused him of the same. Lastly, there was an oil refinery explosion in Wisconsin. I have the chart for the explosion, which is rather remarkable. I need to dig around for times for the other two events. I am hoping to examine these and post about them during the coming week, but I work for the next two days. I work 12-hour shifts, which means that those days are lost days for any other activity, particularly anything time consuming. Any meaningful posting for me will occur later in the week.